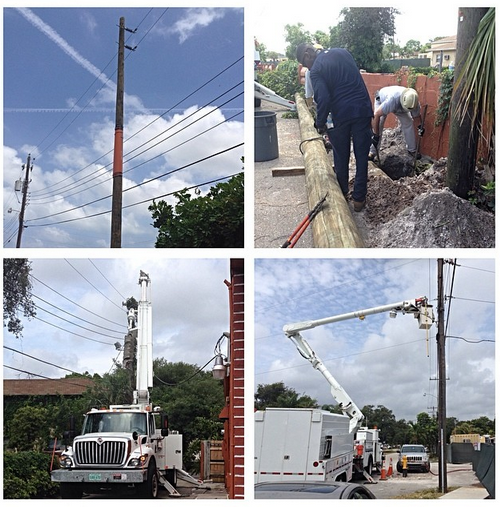 The final phaseout of traditional incandescent light bulbs starts Wednesday, forcing consumers to abandon old-fashioned glass bulbs in favor of more expensive and efficient models that will save them money in the long run, experts said.On Jan. 1 it will become illegal to manufacture or import 60- and 40-watt incandescent bulbs because of federally mandated efficiency standards signed into law in 2007 by then-President George W. Bush.

Traditional 75- and 100-watt incandescent bulbs were phased out at the beginning of 2013, but the coming ban on 60- and 40-watt bulbs will have a greater impact on consumers because of their popularity for residential lighting, experts said.

Home Depot stores in the Dayton-Cincinnati region have “heavy inventories” of 60- and 40-watt incandescent bulbs that should last through the first six months of 2014, said Rob Kalp, the company’s district manager for stores in Beavercreek, Centerville, Hamilton, Lebanon, Miamisburg, Piqua, Springfield, Trotwood and West Chester.

Kalp said some customers are used to incandescent bulbs and reluctant to make the transition to more energy-efficient LED (light-emitting diode) and CFL (compact fluorescent) light bulbs. “We want to make sure that we have a full selection to take care of those customers until they are comfortable with that change,” he said.

LED and CFL bulbs will reduce the environmental impact of commercial and residential lighting, and save consumers money, said Kevin Hallinan, a University of Dayton engineering professor and co-founder of the school’s master’s degree program in renewable and clean energy.

“The reason why the federal government legislated the change is because these incandescent bulbs use four times or more energy than other technologies,” Hallinan said. “That’s more pollution coming out of the power plants, that’s more carbon emissions, so this is really a good thing for the U.S.,” he said.

Experts said 90 percent of the electricity used by traditional incandescent light bulbs is radiated in the form of heat, rather than light.

“That’s why Easy-Bake Ovens have incandescent lights in them. They are actually better at cooking food than they are at lighting,” Hallinan said.

Kalp said consumers will pay more upfront for LED and CFL bulbs, but the new technologies will save homeowners about 85 percent and 75 percent, respectively, on their energy bills. In addition, LED bulbs can last up to 23 years, and CFL bulbs last about nine years, he said.

“They pay for themselves relatively quickly and then continue to save the customer money on their energy costs as the years go by,” Kalp said.

“Switching to efficient lighting is one of the simplest ways to reduce your energy usage at home, and lighting typically accounts for about 10 to 15 percent of a home’s energy bill,” McMillen said.

DP&L offers an average $1.40 discount on each CFL bulb purchase at area retail stores that include Home Depot, Lowe’s, Meijer, Menards and Wal-Mart. The discount is given at the cash register.

Hallinan said some consumers prefer the yellow-colored light from incandescent bulbs, but improvements have been made to both CFL and LED lighting in recent years to provide a softer, warmer look.

“I actually like the white lights better. They add more clarity to your view of things. You can see things better with the same intensity,” he said.

Out with the old and in with the new–light bulbs that is!

As of January 1, 2014, 60 and 40 watt incandescent bulbs will no longer be manufactured or sold in the United States.  Retailers will sell out what is on their shelves and not restock incandescents. George W. Bush signed the phase-out, which was called for by The Energy Independence and National Security Act, in 2007. The bill also includes improvements in energy efficiency for lighting and appliances many of which have been in stores for several years.

Consumers will benefit financially. The transition is better environmentally, as well; making it a win, win for all. Incandescent light bulbs presently make up for over half of all bulbs purchased but are inefficient, turning about 90 percent of the energy they consume into heat, not light. 75 and 100 watt incandescent bulbs have been phased out over the last two years.

According to Noah Horowitz, Senior Scientist and Director of the Center for Energy Efficiency for the Natural Resource Defense Council, the phase out will save Americans $13 billion on their annual energy bills.

Alternatives to the incandescent bulbs include the following:

Philips SlimStyle LED — Currently under consideration for ENERGY STAR certification, the SlimStyle LED bulb reduces energy consumption by 85 percent and lasts 25 times longer than a traditional 60-watt incandescent. It is dimmable, brighter and delivers a softer white light than CFLs. It is safer and lighter weight. The SlimStyle is available exclusively at HomeDepot.com starting January 2, 2014, just in time for the final phase out.

CFLs (Compact Fluorescent Lamps) —CFLs were the first alternative to incandescent light bulbs. Now it has been learned that LEDs are better and will last longer, yet the high initial investment puts them out of reach for most people. CFLs are widely available in grocery and convenience stores. They come in a spiral shape and A-line. If broken they can be hazardous to your health and disposal is difficult.

The movement for healthier, high-performing buildings has reached a new milestone, as the U.S. Green Building Council (USGBC) issued the 20,000th LEED certification for a commercial project.

“The 20,000th LEED certification belongs to an organization that shares our social and environmental values, and we applaud GMCR on its accomplishment,” said Rick Fedrizzi, president, CEO and founding chair, USGBC. “This is an important milestone in our mission to drive market transformation in the built environment to practices that make healthy, high-performing buildings a fact of life.

“We’ve shown that LEED works, and the companies and organizations that use LEED set a high bar for leadership,” he continued. “But there is much work to be done, and even as we mark this milestone, we’re completing the launch of the next version of the rating system that will drive building performance to the next level.”

The Knoxville plant is the seventh LEED-certified facility for GMCR, based in Waterbury, Vt. Focusing on maintaining a resilient supply chain, offering sustainable products and contributing positively to the communities in which it operates, GMCR has made corporate social responsibility a central tenet of its business model. In 2010, 2011 and 2012, it was the world’s largest purchaser of Fair Trade Certified coffee, and it allocates a portion of its pre-tax profits to socially and environmentally responsible initiatives. In June 2013 Northeast Energy Efficiency Partnerships named GMCR a Northeast Business Leader for Energy Efficiency.

Sustainable features of the Knoxville project include a high-efficiency HVAC system and water-efficient plumbing fixtures that result in a 32 percent reduction in water use. Recycled content totals more than 24 percent of all building materials, work stations and seating, while a quarter of all building materials were harvested or manufactured within 500 miles of the project. The project also features high-efficiency lighting fixtures, daylighting and lighting controls, and renewable power sources generate more than 50 percent of the required power.

“One of our company goals is to transform the way the world understands business,” said Jason King, senior director of facilities and engineering at GMCR. “The passion we bring to creating great coffee is the same passion we put toward energy efficiency and environmental responsibility. We are proud to play a part in the green building movement because it closely aligns with our corporate values.”
As the world’s most widely used and recognized green building rating system, LEED guides the design, construction and operation of 10.5 billion square feet of commercial and institutional space globally. By using less energy, LEED-certified spaces save money for families, businesses and taxpayers; reduce carbon emissions; and contribute to a healthier environment for residents, workers and the larger community.
In November 2013, USGBC launched LEED v4, the newest version of the rating system that is poised to raise the bar for the entire green building industry, which McGraw-Hill Construction projects could be worth up to $248 billion in the U.S. by 2016. LEED v4 features increased technical rigor; a more intuitive online technology platform and simplified LEED credit submittal requirements; as well as new market sector adaptations for data centers, warehouses and distribution centers, hospitality, existing schools, existing retail and mid-rise residential projects.

EPA Regulations to Lessen Carbon Emissions Has Many Energy Impacts

The Obama administration has made strides in trying to curb the output of carbon emissions in the US. While some of the EPA regulations have moved forward, some have stalled out for the time being. The Cross State Air Pollution Rule (CSAPR) was set to replace the Clean Air Interstate Rule (CAIR), but was vacated by the courts in late 2011 due to aggressive legal challenges. The Mercury and Air Toxics Standards (MATS) is expected to impact the retirement of a significant amount of coal generation in 2015 with estimates ranging from 10 to 60 GW of potential retirements. MATS is currently being reviewed by the Supreme Court and a decision will likely be made in the middle of 2014. According to a recent article, some believe that these regulations are part of a “war on coal.”

In summary, the article begs the question: How much coal-fired generation will there be in 50 years? The answer may not be as simple as it may seem. Yes, gas prices are cheap now. Yes, something needs to be done to help lessen the emissions of these coal plants. But how can this be done in a way that won’t put tens of thousands of people out of work and not send gas prices through the roof in the next 10 to 20 years?

It appears that the abundance of natural gas in the US is the first step in the scramble to reduce carbon emissions, while maintaining a secure electric grid. Natural gas is now replacing coal and it appears that trend will continue for the foreseeable future as a result of the volume of gas available and the continued low prices. Building a new power plant is expensive, but building a gas-fired plant is relatively inexpensive and fast compared to other options such as nuclear generation facilities and generally faces the least resistance in the approval and implementation phases.

Beyond the economic impact on coal country, another concern is the impact on grid reliability as new plants may not sufficiently replace older plants in regards to being available to run at the right place and right time as needed. Particularly in PJM, fear of costs from Reliability Must Run (RMR) contracts is a growing risk that is very difficult to quantify at this point. RMR costs are expenditures by the system operator to keep plants open that are economically viable, and are needed for system integrity.

There is also the risk of higher natural gas prices due to these changes. As gas replaces coal for generation supply, there will be an increase in gas demand which is bullish for prices, especially since   the gas market is near long-term lows and with additional price support from eventual LNG exports and growing industrial demand. But so far, these factors have been shrugged off in the market place except for a modest year-over-year premium in the forward curve due to the abundance of shale gas reserves.

And while these reserves remain a boon, energy buyers should also consider the various upside risks in the market and consider locking in prices that are very attractive.